Poland, 1983. In the country, despite it being suspended, there still is martial law earlier introduced by the communist regime in order to supress the Solidarity opposition. On 12th May, Grzegorz Przemyk, the son of Barbara Sadowska, an opposition poetess, is detained and severely beaten up by a police patrol. Przemyk dies after a two-day agony. The only witness of the fatal beating is one of Grzegorz’s colleagues, Jurek Popiel, who decides to fight for justice and testify to incriminate the policemen. At first, the State apparatus, including the Ministry of Internal Affairs, understates the matter. However, once twenty thousand people march in the streets of Warsaw behind Przemyk’s coffin, the authorities decide to use any means available against the witness and the mother of the deceased to shame them and prevent Jurek from testifying in court. 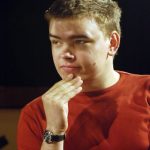 Born in 1984 on Katowice. Director of short films, music videos and commercials. He graduated from the Film Directing Department of the Silesian University in Katowice and a documentary course at the Andrzej Wajda Master School in Warsaw. His films were presented at numerous film festivals in Poland and abroad. Director of the feature-length documentary “Deep Love” awarded multiple times. His feature-length film debut, “The Last Family”, became a real phenomenon distinguished with many awards in Poland and around the world. It was recognized as the ‘most artistically mature debut of the last seasons’. At the Film Festival in Gdynia in 2016 the film won the Golden Lions, the Journalists Award and the Audience Award. Apart from that, The Last Family received other awards, including the Golden Angel at the 2016 Tofifest IFF in Toruń, the 2016 FilmFestival Cottbus for Best Debut Film and the Krakow Film Award at the 2017 International Festival of Independent Cinema Off Camera in Krakow. Director of many TV series. In 2020 he directed the entire series “The King of Warsaw” based on a novel by Szczepan Twardoch.

Screening supported by the
Embassy of the Republic of Poland