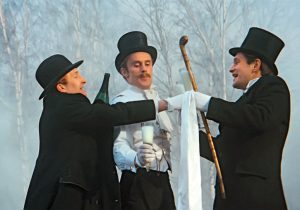 Karol Borowiecki, a young Polish nobleman, is the managing engineer at the Bucholz textile factory. He is ruthless in his career pursuits and unconcerned with the long tradition of his, now financially declined, family. He plans to set up his own factory with the help of his friends Max Baum, a German and heir to an old handloom factory, and Moritz Welt, an independent Jewish businessman. Borowiecki’s affair with Lucy Zucker, wife of another textile magnate, gives him advance notice of a change in cotton tariffs and helps Welt to make a killing on the Hamburg futures market. But more money has to be found, so all three characters cast aside their pride to raise the necessary capital.
On the day of the factory opening, Borowiecki has to deny his affair with Zucker’s wife to a jealous husband who makes him swear on a sacred Catholic object. Borowiecki then accompanies Lucy on her exile to Berlin. However Zucker sends an associate to spy on his wife; he confirms the affair and informs Zucker, who takes his revenge on Borowiecki by burning down his brand new, uninsured factory. Borowiecki and his friends lose all that they had worked for.
The film fast forwards a few years. Borowiecki recovered financially by marrying Mada Müller, a rich heiress, and owns his own factory. His factory is threatened by a workers’ strike. Borowiecki is forced to decide whether or not to open fire on the striking and demonstrating workers, who throw a rock into the room where Borowiecki and others are gathered. He is reminded by an associate that it is never too late to change his ways. Borowiecki, who has never shown human compassion toward his subordinates, authorizes the police to open fire nevertheless.
ANDRZEJ WAJDA 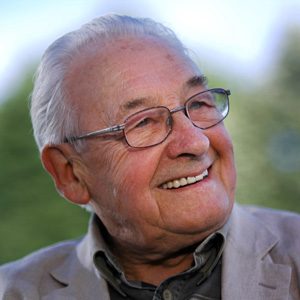 Born in 1926 in Suwałki, died on October 9, 2016 in Warsaw. Studied Painting at the Fine Arts Academy in Krakow (1946-50), graduated from Film Directing at the Łódź Film School (1960). Head of “X” Film Studio (1972-1983), president of Polish Filmmakers’ Association (1973-1983), director of Teatr Powszechny in Warsaw (1989-1990), senator of Republic of Poland (1989-1991). Member of Institut de France – Academie des Beaux-Arts, BAFTA, European Film Academy and American Film Academy. Recipient of hundreds of film awards and awards for lifetime achievement. In 2000 he received an Oscar as the Honorary Award for five decades of extraordinary film direction. Awarded honorary degrees at numerous universities, including Washington, Bologna, Cracow, Warsaw, Moscow and Gdansk, as well as Fine Arts Academy in Warsaw, Łódź Film School and WGIK in Moscow. Honorary citizen of many Polish cities. Founder (2002) and lecturer of the Andrzej Wajda Master School of Film Directing.